Hello from New Year's Eve where I'm doing not much!
x_+
Top

It's very lonely here Slick. Last year I got into electronics and 3D printing. Electronics is tricky, I have far more ideas than I have time and skill to execute (I can basically assemble a series of leds). But I watch way to much youtube videos on the subject. Better for my brain than cat gifs I assume. 3D printing is right up my alley, and it was much easier to get started than with a 2D printer. Working with 3d software for so many years is finally proving itself useful!
Top

Man, it's too bad that everyone's pretty much abandoned this place again. Then again, I guess it's kinda inevitable that people move on from their old friend groups and get busy with, well, regular life.
Follow me on Twitch! Or don't. I respect your decision.
Top

Xinos wrote:It's very lonely here Slick. Last year I got into electronics and 3D printing. Electronics is tricky, I have far more ideas than I have time and skill to execute (I can basically assemble a series of leds). But I watch way to much youtube videos on the subject. Better for my brain than cat gifs I assume. 3D printing is right up my alley, and it was much easier to get started than with a 2D printer. Working with 3d software for so many years is finally proving itself useful!

That's very cool. Any pictures of things you've made so far?


ViceroyOfMonteCristo wrote:Man, it's too bad that everyone's pretty much abandoned this place again. Then again, I guess it's kinda inevitable that people move on from their old friend groups and get busy with, well, regular life.

Yeah "life" is very overrated. Jobs, taxes, bills, social relationships - it's exhausting. Especially if you're introverted and people tend to drain your energy.

I still try and remember to come back here though. Granted it's been like a year. But I've been a very disgruntled person in the last year because of my job.
Now I work from home and it's the bees knees.

Speaking of which - I can hire someone if someone wants a job that only pays like $10 an hour making phone calls from home.
If you can read this....you're not blind.
Top

My own work-from-home job is kind of kicking my ass these days. I, uh, wish I felt more like I were cut out for it, but I'm really not sure. Also I'm totally under the weather and seasonal affective disorder is being especially brutal on me this year, so, yeah. Having a good time.

Slick wrote:That's very cool. Any pictures of things you've made so far?

I don't have much online at the moment but I should make an album. Will try to get something up soon!

Zeor, yeahp I'm usually on discord. I don't think I've yet to actually talk to any of you.
Top

Im solely on Google Hangouts. Discord might be doable but I have so many windows and things open all the time I dont think I'd remember to log on to discord even if I made an account.

SAD is terrible. I usually hit it the hardest the second the time change happens and it's dark at 4pm and cold outside... it usually always last until around now - when the sunlight starts lasting a bit longer every day.

I'd look forward to seeing some of that Xinos.
If you can read this....you're not blind.
Top

I still use IRC but only read a fraction of what's said on there. Hard to justify having more programs running.

Presumably these days they have an app for that.
x_+
Top

Alright, here's a Kirby i printed and painted.
https://i.imgur.com/b9Tbm4k.jpg

Sadly it's not my model, credit goes to reddit user Shark_Socks.
Top

Alright enough procrastinating! Here are most of the projects I've done so far.

One of the very first things I printed where these plates for a pair of headphones I own. The original aluminium plates are meant to be replaced by other designs that you buy from their site. About two years ago I had the idea of printing something with depth rather than just a painted piece of metal, so it felt like a good place to start. Last summer I was playing around with Arduinos and led lights so I assembled some NeoPixel rings and started programming a clock. Printing a housing for them was something I wanted to find a printer for. The clock works fine, but here's a video of it behaving like a shift register.

I soon found this t-rex skull online from MakerBot. I was only going to print the head at first, but I got carried away and kept adding the rest, piece by piece and now I have the entire skelleton. It still waiting for to assemble it. I had to focus on other things since Christmas was coming up and I've just not gotten back to it yet. Will post a picture of it when I do though.

So I did two Christmas projects. For my girlfriend I printed the creature from The Last Guardian. I found a really nice model online and got permission from the artist as long as I sent her a copy. This is partially why I wanted to split it into assemblable parts; much safer to for packaging. It was allot more work than I expected to get it cleaned up and separated. But everybody was very happy with the result, so it was worth it!
My mother is a big fan of Moomin so I made a little usb powered LED lit light based on the spooky electrical Hattifnatt ghosts.
Top

Much kudos to Abime for hosting Dream17!
x_+
Top

It's great to be able to say I've finally released my debut album on CD. It only took me nearly 10 years to record (there was a lot of procrastination involved). It's goofy industrial noise using vocals and kitchen utensils. The project name is a combo of two of my nicknames (the 2nd also being the reason I originally went by TheHarvester on WA wormnet). I actually made a Dead Kid Harvester-themed map years ago too.

The first track I recorded for it way back in mid-2008 was my song about Worms. It's actually a remake as I made an early version in 2003 and I think I posted that around a few Worms forums, but I don't remember getting much of a response. Eventually one day that early stuff will be fully unleashed on the world again. Anyway, I posted this current version on the T17 forum at the time and disturbed quite a few people! 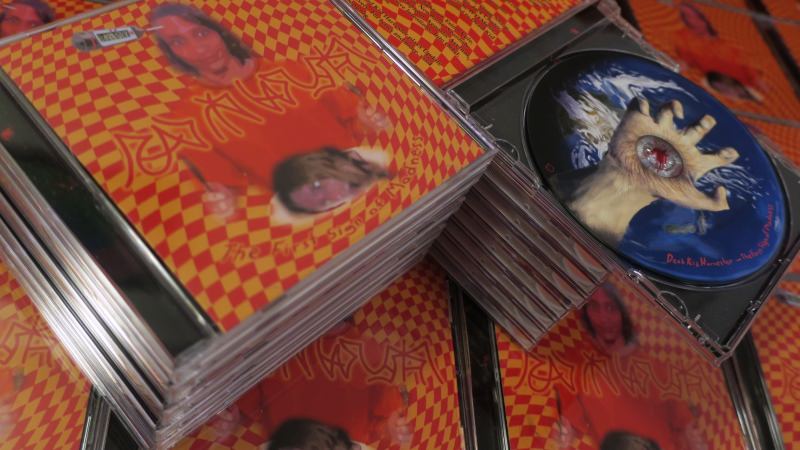 Give the Dead Kid Harvester page a like and message me for a CD, or hear it on digital:

So I learned one of my old passwords was compromised so I've been rifling through all the old forums to change my password on the off chance that somebody else tries to access it.

I'm gonna for a quick bask in the nostalgia, before I die from seeing young me saying and doing all sorts of cringy stuff.
Top

2005 is such a long time ago, though my posts were no longer cringy by that point. Reading some of my posts in the T17 forum archive might tell a different story if the early ones survived. The T17 forum was still a record post count for me, 6,500-ish. I have currently have 5,942 posts on a music forum I started posting on in 2005, but it's close to inactive now.
x_+
Top

Getting blasted by wind up on Mt Wellington in Hobart in my Badly Drawn Dawg shirt. Now also a badly worn dawg shirt. 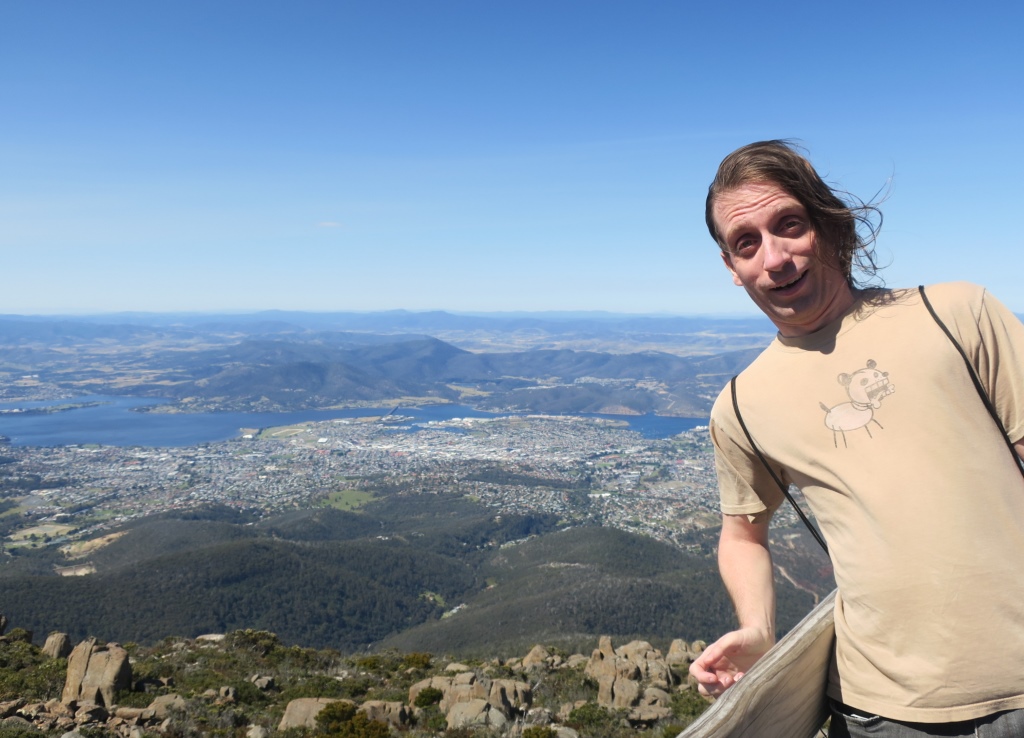 Wooow. Spectacular photo even if my cartoon soul is trying to sprint out of my body from the perception of height.
Zero72, Team17 Forum member (and former Cartoonist), June 2002 - June 2013.

Not long after I made that post the t-shirt came out of the wash with a food stain still on it. Had to use dishwashing liquid, which I think caused part of the shirt to be cleaner than the rest so now I'm gonna have to apply dishwash to the rest of it.