Everybody is happy to finally get into some (semi-)friendly territory. Hopefully nobody tries to pick a fight on our heroes in this locale. Worm Mad, being the self-designated "captain supreme ultimate hero leader master winner who gets all the ladies and can shoot lasers from his eyes", decides that the first "friendly peoples" he finds, he'll invite along on their Grand Breakfast Expedition™. Of course they'll have to pay for their own food.

Splapp "hails" the refugees.
"OI, ME PAL 'ERE WAN'S TA' KNOW IF YA' WANNA' JOIN US FER NOSH"
Unsurprisingly, they are hesitant to reply.

That's what you get for letting Splapp talk to strangers.
So Mad, Splapp and Beardy spend the next minute beating the hell out of them. SO MUCH FOR THIS AREA BEING "FRIENDLY". Also unsurprisingly, this time when Mad talks to the refugees, they have no real desire to follow them to Denny's. Maybe because they're familiar with the bad record of ratings they've gotten from the Food Safety Board.
Or maybe they just don't want to be near Splapp.

I think the Zoltan are usually more mild-mannered than that. Sheesh.
Zero72, Team17 Forum member (and former Cartoonist), June 2002 - June 2013.

Yay, none of our crew has died yet!

[Cue next post being nothing but death]
Worm Mad - is he a mad worm or a person mad about worms? I'll give you a clue - it's not the first one.
Top 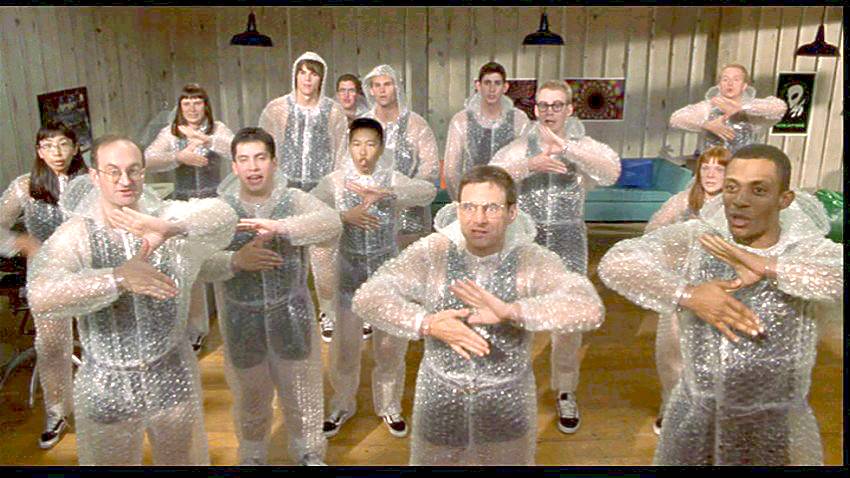 Oh right, did I forget to mention that the weapons room is on fire? Because that's a thing that's happening now. Have fuuuuuun~
But no seriously everyone put it out pretty easily In an attempt to reconcile their... less than stellar (no pun intended) first encounter with the local population, Mad decides they should try and help out the next people they meet. While he isn't the most... technologically savvy, he hopes he can make a better impression on this crowd. "Beardy, are you entirely sure this is the best option?"
"Trust me man, there's absolutely NOTHING that could go wrong with this plan. Trust me." Mad spends the next 10 minutes chasing Beardy around the ship throwing things at him.
Splapp takes full advantage of the situation by playing Yakkety Sax over the intercom and filming it.
The overall karma of the crew for this region is dropping dangerously low. Well it seems for now death is in bed smacking the "snooze" button now and then. Curious when they will all die when they will reach the farm where everyone else is. Alive and well!
Top What the hell people, there are gosh dang pirates bloody everywhere
You would think the Zoltan would be capable of controlling such things on their own territory. Once again, Mad tries to be the voice of reason and "lets the pirates off with a finger wagging and a strongly worded letter to their supervisors on how terrible they are at piracy".
Apparently Mad was never informed of how the second rule of piracy is lawlessness. (The first rule, of course, being to drink a lot and yell YO HO HO)

The crew arrives at their exit point early and decide to explore a bit before getting back on their Lawfully-Patented Trek for Enlightenment and Cheap Breakfast®.
Nothing could POSSIBLY go wrong by wandering into an area heavily populated by dangerous space rocks which could obscure enemies or easily damage the ship, riiiiiiiiiight?

OOOOOOOOOOH WHO COULD'VE EXPECTED THIS SHOCKING TURN OF EVEEEEEEENTS

This time Mad doesn't even get the chance to try and reason with the pirates, as their ship is violently barraged with space rocks, lowering the shields so often that every shot from the protagonists' ship connects.
Welp, that's what you idiots get for trying to initiate a firefight in the middle of a flippin' space landslide
Follow me on Twitch! Or don't. I respect your decision.
Top

DAMN YOU ASTEROIDS, YOU WERE SUPPOSED TO ROCK!

Asteroids are usually very spread out with huge distances between them.
I'm great at parties.

IS there an actual way to win this game?
If you can read this....you're not blind.
Top

Slick wrote:IS there an actual way to win this game?

Anyway, back to our regularly scheduled programming.

After narrowly escaping the asteroid field with... minimal hull damage, our "heroes" are one step closer to their doughy, low-cost-high-fat destination!

Neato. Everyone thanks the random passers-by for the delightful fork that just got sloppily welded to the front of the ship, and Splapp yells something about his general concern for it possibly acting as a lightning rod or GPS tracker or something and how they're clearly rebel spies trying to kill us.
Beardy reminds Splapp that there's no lightning in space and gets a 10-minute ramble from Splapp about how unpatriotic it is for him to say such a thing. After refueling and getting some touch-ups on the hull, the crew unanimously agrees never to help anyone in distress ever again unless they're guaranteed to get paid for it. You're in the army now boys, hope you don't lose your respect too by passing up this opportunity.
Follow me on Twitch! Or don't. I respect your decision.
Top

The angry ghost of Zeor is cheering you on! Well, the boys have their objective laid out for them. Nothing of interest, thankfully, happens along the way other than some Engis denying an offer to help in whatever argument they were having. Probably something inconsequential, like their plans to subtly murder these three idiots who entered their system in a rag-tag outdated spaceship. Probably would say that all the systems before them sent messages saying to watch out for the stupid pricks, too.
Of course this is all hypothetical, right? Who knows what they were talking about.
(That's exactly what they were talking about.) Seriously, this robot thing is what was freaking these guys out so much? We've killed like 5 of these sheesh. Grow some nads guys. Wow. Uh, this gun they game us is realllllly powerful. Didn't even have to use the fork thingy. Well, you know what they say, the more the merrier. Of course, this just means one more mouth to feed, but everyone supposes a little more company could help to keep everyone's sanity in tact a day or two longer. Or drive it away exponentially faster, but hey you gotta take some risks sometimes. Just one matter to take care of first... Perfect.
Follow me on Twitch! Or don't. I respect your decision.
Top

Cool! We're thriving and expanding the crew. What were the odds of that?
Top

Pilger wrote:Cool! We're thriving and expanding the crew. What were the odds of that?

I expect horrible death in the next chapter...
Top

Well, our "brave", "loyal", and "handsome" crew has just gained a new member, so now we've gotta find somewhere to put him. Splapp suggests the broom closet.
What broom closet, asks Mad.
Everyone now learns that Splapp's been storing supplies in the airlock. Which has been opened several times to prevent the spread of fires.
Hope you guys didn't need that food and weapons and things! Wow, good thing you guys have such a great reputation otherwise people might think you're homicidal maniacs oh wait Regardless, the members of the other ship still seem like they want to help you for some reason. Or maybe they're just scared of the consequences of what might happen if they don't help out. Not to mention that Vader never washed the blood fruit punch from his mouth. Dude you ever heard of hygiene? On the way out of the sector Mad decides to sell what few drone parts they have left after most of them were unceremoniously sucked out the airlock because someone's a dang idiot not naming names cough cough
Besides, there isn't even a drone bay on here. Where would we even put one? We're even more out of room than usual now that we've got this dang robot lookin thing with us.
Vader looks offended. Somehow. Almost there boys! Just one more sector and you're home free for SPACE BREAKFAST

Everyone's gotten a lot better at mowing down space pirates now that they've lost all scruples and decency. Even Mad seems to be enjoying the view of the ships fragmenting and drifting off into space.
Beardy and Splapp eagerly celebrate his departure from the No Fun Zone. Vader is glad everyone's bonding over murder.
Follow me on Twitch! Or don't. I respect your decision.
Top
Post Reply
69 posts